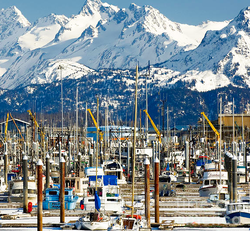 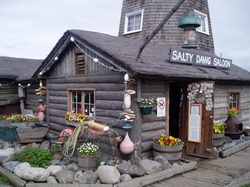 Salty Dawg Saloon
The Salty Dawg Saloon is a well-known landmark on the Homer Spit in Homer, Alaska.
The Salty Dawg originally was one of the first cabins built in Homer in 1897, soon after the establishment of the town site. It served as the first post office, a railroad station, a grocery store, and a coal mining office for twenty years. In 1909 a second building was constructed, and it served as a school house, post office, grocery store. And at one time, it housed three adults and eleven children.

Quilts For U
This client wanted her daughter's quilt in pink and brown.  It was embroidered with faeries and butterflies.

Continued ...
The baby's specifics were embroidered on the back.  A life-time keepsake.

Quilts For U
This was made for a 50th anniversary out of old wedding dresses of satin, lace, and taffeta.  It was hand quilted as well to add to the age.

Quilts For U
The following quilt was designed for African Relief and auctioned.  The woman below won the bid for $800.  The back of the quilt was native women in vibrant colours.  The quilt was made with 49 different materials. 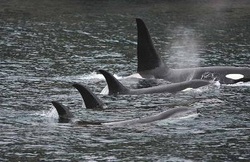 Orca Whales
﻿﻿This pod of Orcas swam about the boat for nearly twenty minutes or so.  The Bay cruises give you a
close up encounter with numerous animals that survive in and around the ocean.﻿﻿ 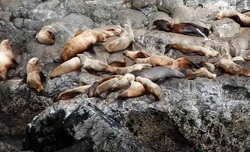 Sea Lions can be seen in Resurrection and Katchemak Bays via a cruise.