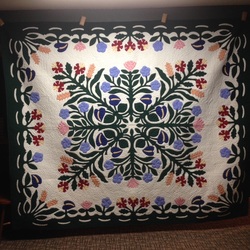 This is an example of the Hawaiian quilting method.  The stitching follows the outline of the pictures.  It looks like the water surround the islands. 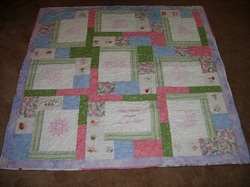 For the Little One

This quilt was was created for a couple who had tried for years to conceive.  Embroidered blocks have unique snowflakes while one lists the name, date and birth info of the new child.  Gifts like these are saved forever and presented again when the child marries as a cherished keepsake. 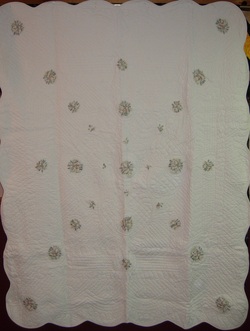 Satin rosettes on taffeta made up two twin quilts for a couple's wedding.  The colors were suggested by the room's decor. 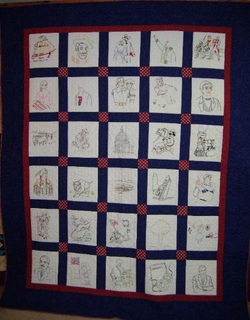 Hand embroidered blocks, beginning with the landing of the Mayflower and ending with Nixon.  A compilation of major events in American History.  (1492 - 1776) 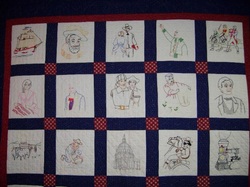 Class Is In Session!

Can you identify these scenes from history?

These initially were embroidered on the bottom tier of a square dance skirt.  Twenty years later, the scenes were removed in blocks and lay in a pile until 2008 when it was made into  this quilt.  This demonstrates what can be done with old, unused hand work. 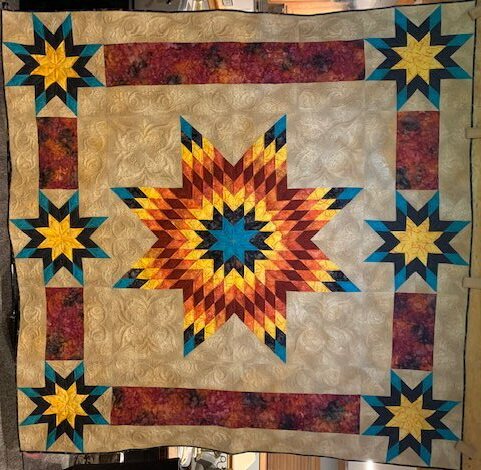 Navajo inspired quilt by Donna Weeks of Alaska.  The background is reminiscent of the New Mexico sands and is surrounded by night time cooking “fires.”  The colors in the mid star, black, white, blue, and yellow link the Navajos to their ancestral homeland and the story of its creation. The yellow represents the sun shining from the east on the four mountains sacred to the Navajo.  The red is the hallmark of sunshine, and is a blessing for Navajo health and spirituality. Black is for darkness, and a time to restore our bodies and minds.  The turquoise is especially important to the Navajo people because of its religious significance, and its representation of a well-being individual. The back shows the smoke and embers as they float into the night skies. The detailed quilting is a cross between the cacti and snakes of the desert and was done by Sharon Hughes of Idaho.